Avalon II is an Arthur-themed game with low bet sizes and frequent payouts. It contains a number of mini-games within the main game such as dice and roulette, so it provides an altogether richer experience than a standard one-armed-bandit type of game. 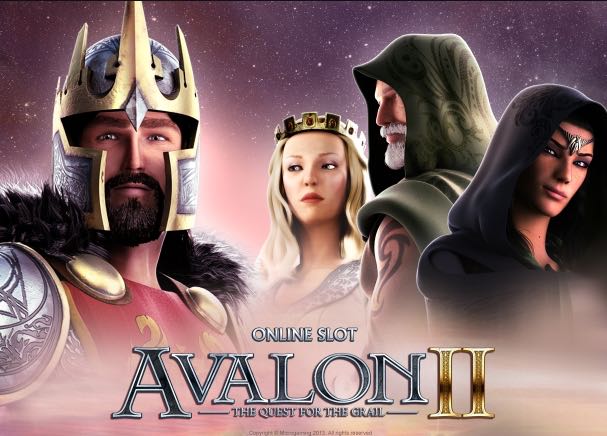 Sort of like the Thunderstruck pokie series from Microgaming, the Avalon saga began with an above-average yet otherwise forgettable pokie experience in the mid-2000s. And also like Thunderstruck, Avalon has been followed up with a sequel that not only blows its predecessor out of the water, but most other slots as well.

There was little deliberation among our Avalon II review team about what kind of ratings it should get across all categories. The answer was easy: high ones.

If you don’t like a particular feature in Avalon II, then just wait a few minutes. The game is so stacked with different bonus mini-games, it feels more like eight different games (plus the base game itself) rolled into one.

Excellent Arthur-themed graphics and immersive, complex gameplay are combined with multiple mini-games & bonus features to keep you entertained for a hours.

Because of the bonus feature-focus of Avalon II, the game’s basic symbols don’t pay out that much (completely understandable). They are, in order of highest-paying to least, Arthur, Merlin, Guinevere, Morgan, the Black Knight, and then 9, 10, J, Q, K, A. The game’s wild is the Avalon II logo which pays out 100 for five of a kind; the scatter is the Holy Grail which triggers the Grail Bonus adventures (see below in our review of Avalon II), but also pays out 15,000 coins when it appears five times.

Similar to Thunderstruck II, the bonuses in Avalon II are awarded in sequential order. Here, three or more Holy Grail scatters take you to the map of Camelot that lays out what bonus level adventure awaits before you. In order, they are:

There are countless ways to win countless different amounts of payouts, but it’s commonly accepted that a modest 2,430,000 coins is the game’s top achievable jackpot.

Dedicated mobile apps for single pokies have become pretty passe, and Avalon 2 has abided by that trend. No app is necessary to play it on a variety of supported smartphones and tablets, but you may also be able to find he game within your favourite online casino’s mobile app.

Aside from how quickly we could begin playing it in our device’s browser, our Avalon II online pokies review notes for mobile also highlighted:

Why Avalon II Is Worth Playing

If you played the original Avalon, you’ll be spellbound by the sequel’s transformation (and by how much gold it can leave you with).