Reel Rush is a classic-looking pokie that capitalizes on your nostalgia for the games of the 80s to reacquaint you with Mario and a whole lot of fruit in order to keep you entertained. And you can play the whole thing on any device so you can take it anywhere with you! 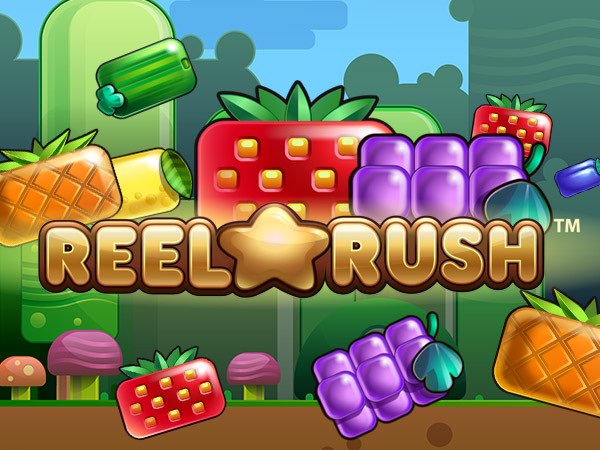 The first thing that will charm you about Reel Rush is its unmistakable Super Mario-inspired theme with a splash of Candyland thrown in. The game’s interface can only be described as ‘clean’, with simple crisp graphics and not a single pixel in the way that shouldn’t be there.

However, the game doesn’t just rely on a lookalike gimmick to pull in players and keep them there. Reel Rush’s free spin feature is unique, as the paylines expand with each bonus round you earn, culminating in an unbelievable 3,125 ways to win if you can manage to get over five free spins in a row. While small ones, the game has its downsides but they definitely aren’t anything glaring enough to where we wouldn’t give Reel Rush anything but our strongest recommendation to more frugal Aussie pokie players.

This NetEnt creation is one of the more beautiful pokies we’ve seen in a while. Our Reel Rush online pokie reviewers all found the graphics to be simple and clean, just like the gameplay which some players might find a bit dull but many others will find to be exactly what they are looking for in an era of overly-complicated slots.

Once we dug deeper while doing our Reel Rush online pokies review, we discovered many other things we loved about this pokie as well:

A simple gameplay that also offers high payouts against a vibrantly coloured background. Perfect for players new to online pokies.

The highest paying symbol in the game is the watermelon-looking Mario block at 1000 coins for five-of-a-kind. The similar pineapple, lemon, cucumber, grape, and blueberry blocks all pay out between 100-500 coins for showing five times, as well. On the lowest-paying end are five different-colored circles which all pay out the same when one of their colors shows three, four, or five times: 5, 15, or 50 coins, respectively. The wild symbol (a bronze block that says Wild) does not award coins when it appears in multiple, but can substitute in for any other symbol to help complete a payline.

Unfortunately if you were hoping for a fun Mario-inspired bonus game you will be a little disappointed, as the game lacks any sort of bonus game in general. However, any time you hit a combination of any kind in Reel Rush you are going to be awarded spins which is pretty unique compared to most pokies. You can even earn more free spins during those free games, and a winning combination after the fifth free spins gives you eight more bonus rounds.

With each re-spin the number of paylines increases, from 135 for your first re-spin (the base game has 45) to an incredible 3,125 after your fifth. Should you go the distance and unlock that many paylines, your total potential jackpot would then be 480,000 big ones.

Reel Rush is part of NetEnt’s mobile Touch line of apps, meaning the game’s mobile version is specifically optimized and design to be compatible with many different mobile smartphone and tablet apps.

When testing out the mobile version our Reel Rush review team loved:

Why Reel Rush Is Worth Playing

Just like it’s inspiration from the simpler days of video games, Reel Rush honors that simplicity with this equally straightforward pokie. While you won’t win big (unless you manage to get the top jackpot) the team doing our review of Reel Rush made a long list of things we liked about the game and reasons we would recommend it to all Aussie pokie players.