Play SPIDER-MAN: ATTACK OF THE GREEN GOBLIN and 600+ other pokies for free at Spin Palace

This pokie continues Playtech’s streak of creating high-quality Marvel-related games. There are so many features here that we can’t even list all of them so go out there and check out this beautifully detailed, nostalgic-looking pokie! 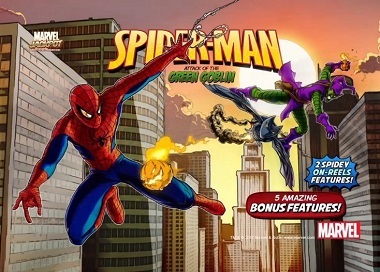 There’s a reason that Marvel decided to lend out their license to Playtech when choosing who to have develop a line of pokies featuring their biggest superhero stars. And that reason (many of them, actually) are prominently on display within Spider-Man: Attack of The Green Goblin, one of the best online pokies for Aussie players we have ever reviewed here at pokies.com.au.

Playtech didn’t just take the Spiderman theme and put a slot with lackluster features and little else on top of it, instead they made like their pokie got bit by a radioactive slot and mutated into one of the most powerful and feature-laden pokies we’ve ever seen. What that means will be obvious when you read our review of Spider-Man: Attack of The Green Goblin, and we know all Aussie pokie players will enjoy on both PC and mobile (no apps required).

When the biggest complaint from our Spider-Man: Attack of The Green Goblin online pokies review team is that you don’t get to pick which of the SEVEN bonus features you get to play, you know you have a good pokie on your hands

Where to begin? This Playtech pokie features more features than we have room for here, but we’ll try and summarize the best we can below in our Spider-Man: Attack of The Green Goblin online pokies review. Just know that some (but certainly not all!) of the highlights include:

The game’s highest paying basic symbol is the Green Goblin himself, who pays out 1000 coins when he appears five times. Paying a little bit less are the Mary Jane, NYC skyline, Daily Bugle, camera, and 9, 10, J, Q, K, and A symbols. The game’s Wild symbol (a red box that says WILD) carries its own huge bonus, at 10,000 coins for five a kind and on down.

Spider Man’s wide array of bonuses are available to players of all budgets, as wagers as small as 0.25 and as large as $125 can be made per spin.

Alright, here goes. At the expense of not giving our Spider-Man: Attack of The Green Goblin review team all carpal tunnel, we’ve only done a surface listing of the many great bonuses this pokie has to offer. For the full details of each and everyone, check out the slot’s detailed paytable.

Spider-Man Wild Feature: Triggered-randomly, Spider-Man will shoot his web at reels 2, 3, or 4, turning them into Wild reels for the next spin.

Spidey Snapshot Feature: Also triggered randomly, Spider-Man will drop down and be photographed by the Daily Bugle, whose next day headline will reveal that your wager for that spin has been multiplied by 3 to 10x.

Spider-Man Collection: Triggered during the main game only, Spidey comic books will spin quickly on reels 1, 3, and 5 until the player click stops. Where and how these comics land will determine which of the next four features you will begin playing.

Ultimate Fight Feature: Fight the Green Goblin on a downtown rooftop by choosing one of five symbols until either combatant’s power bar reaches 0 after suffering too many strikes from the other. Even if you lose, you’ll collect combos along the way, but defeating the Goblin will garner you some serious real cash.

City Chase Feature: Swing across the city chasing after the Green Goblin, collecting hidden prizes Spidey symbols that will help you in other mini-bonuses.

Spider-Man Collection Bonus: Here, you’ll have 20 free spins. For some of them, Spidey will shoot a 2x2 web on the reels to create a ‘hot zone’ where wild and Green Goblin symbols will stick for the duration of the hot zone spins, and the latter with a 2x multiplier.

Rivaling Free Games: Three goblin faces or Spiderman logos on reel three during the Collection Bonus triggers this mini-feature that rewards you with 10 free spins. If that same Spiderman logo appears on reel three during these free spins, the free game counter stops, meaning potentially limitless free games. During this feature you can also increase your bet multiplier up to 5x.

Radioactive Free Games: Three radioactive spider symbols in the Collection Bonus commences this feature where you’ll receive 15 free games. That spider symbol acts as a wild on reel three and when it shows there it will throw additional ones out on reel 2 and 4.

Marvel Multi-Level Mystery Progressive Jackpot: There are four different Marvel progressive jackpots linked to this game as well as the other Playtech Marvel character slots. All four are won randomly during any base game spin, however the higher you bet (and the more you play), the better your chances are of winning. The jackpot game itself is a 4x5 grid that has different jackpot symbols hidden under each square. Matching three symbols in a set number of time and clicks can win you one one of those massive prog jackpots.

Fading quickly are the days where pokies have their own dedicated smartphone apps, and Spider-Man: Attack of The Green Goblin is a great example of why. When you load this pokie on your mobile device’s favourite browser you’ll find everything you’d find playing on your laptop or desktop computer:

Why SPIDER-MAN: ATTACK OF THE GREEN GOBLIN Is Worth Playing

If you’re a huge Spider-Man fan, you probably didn’t need much convincing from us to play this great Playtech pokie. But even if comics aren’t your thing, know that we’d recommend this top pokie to Aussies everywhere due to the sheer variety of seemingly never-ending bonus features, games, and spins. And who knows, maybe Spider-Man will sling you a large pile of reel cash and you’ll have a new favourite superhero.