Aristocrat Online Pokies: Get to know these popular games

Aussie players like you who are looking for a real-money casino online can find great Aristocrat online pokies at sites like Spin Palace , our top recommendation. So check our recommended sites today and find some top games with the best bonuses around.

Read on to find out more about: 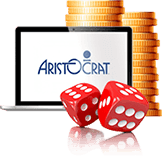 JUST THE BEST ARISTOCRAT POKIES APPROVED BY OUR EXPERTS

We've scrutinised ALL casinos on this page so you can count on:

Aristocrat Leisure Limited is steeped in gambling lore. When Australian gaming laws were relaxed in the 1950s, Aristocrat began making pokies for clubs and bars around the country. The company was founded by Len Ainsworth (who went on to head up his own rival gaming firm named after himself) but pokies are just the tip of this gambling empire. Aristocrat casino products these days include electronic table games and network systems.

It wasn't until the video pokies boom in the 1980s that the firm really grew, however, and now leading Aristocrat pokies can be played in casinos from the USA to Europe and, of course, at home, online, in Australia.

When it comes to pokies online, the Sydney-based company was at the forefront from day one, with the first titles emerging in the late 1990s. Today, most good Internet casinos will feature Aristocrat games.

If you've been in a top Melbourne or Sydney casino you'll recognise the familiar Aristocrat bells when players hit the bonus feature. Happily, those same iconic casino noises are replicated in many Aristocrat online pokies, developed in partnership with Nextgen Gaming.

Classics like the Egyptian themed Queen of the Nile and the Asian-themed 5 Dragons offer no-nonsense pokies gameplay with free spins bonus rounds. 50 Dragons has four rows with its five reels and 50 paylines and players can win 10 free spins by hitting Scatters on the first three reels.

Big Red, meanwhile, caters for bigger players with 50c minimum coin bets. But Queen of the Nile is perhaps the developer's best game, and comes packed with Egyptian symbols and a bonus feature delivering 15 free spins.

Queen of the Nile II takes things a step further. Its bonus round can offer 20 free spins with a 10x multiplier on wins. As with many Aristocrat online pokies casino games, the bonus feature can be retriggered.

When it comes to pokies online, Aristocrat titles normally offer bigger RTP percentages (Return to Player) than their land-based cousins. An RTP of 96 or 97 percent isn't unusual and this will be massively lower at your typical land-based casino in Australia.

The Future For Aristocrat

Australia continues to lead the world in pokie machines in casinos and bars. A recent study showed that New South Wales was second only to Nevada in pokies per capita, and you can bet your bottom dollar Aristocrat pokies form a large part of that count.

In 2014, the Australian company bought out US-based Video Gambling Technologies in a deal worth $1.3 billion. With the deal sealed, Aristocrat's exposure in America grew from about 8,200 machines to over 28,000. And while pokies revenue closer to home is falling, Aristocrat evidently sees its future in America. Time will tell whether their audacious takeover will reap rewards.

If you want great pokies online, Aristocrat have some of the best around. If you play in casinos, you know what you're going to get, because there's little difference between Aristocrat online pokies and their original land-based machines. That means you can enjoy the same great Australian games in the comfort of your front room.

Aristocrat is an Australia based slots company that is located in Sydney and has slots machines all over the world. They also have international offices in the United States. Russia, South Africa and Japan. Aristocrat is extremely successful and are considered the second largest slot machine producer in the entire world. Aristocrat has been around for a long time, as their first machine came out all the way back in 1953. They produce reel spinning pokies machines, computerized slot machine network management, computerized card games, linked jackpots and recently, online pokies. Their most famous game is Queen of The Nile, an Egyptian themed pokie. Aristocrat has put out a large selection of really excellent games, both in person pokies machines and online pokies, but right now they are mostly an in person machine company.

Aristocrat has a slightly smaller game library than some other pokies companies, but with them it is really more about quality than quantity because all of their games are excellent quality and they offer some very enticing bonus features as well. Aristocrat games have sharp graphics, interactive betting, and inventive themes that keep customers coming back for more. Some of their online pokies include the Outback themed Big Red, Wolf Moon, 50 Lions, Let's Go Fish'N, the ever popular Miss Kitty, Hawaiian themed Tiki Torch, Chinese themed Silk Road, Pelican Pete, the Lucky Count who happens to be a vampire, and Geisha. These are only a few of their games, they have about 30 pokies total to choose from.

It is really easy to find places to play Aristocrat pokies online. You can either go to aristocrat's website or one of the casinos they are affiliated with. If you know the particular game you want to play, just search for that game's name in any search engine and you will come up with plenty of options for where you can try it out for free and then sign up for an account later when you want to play for real cash. It really helps to try games in the free version first, so that you can see the bonus features with your own eyes and get a feel for the game.

Aristocrat pokies are never rigged, they are extremely safe. Aristocrat is one of the biggest names in pokies worldwide, and they have built their strong customer base on the basis of being fair and honest. If Aristocrat were to cheat their customers, no casino, online or otherwise, would want to carry their games as part of their library because it could get them in a whole lot of trouble. Gambling is highly regulated in Australia, so you can be sure that Aristocrat has to adhere to all of the same standards that all other gambling companies.

Yes! Aristocrat does have some really nice jackpots. Right now, unfortunately they do not offer any progressive jackpots. But, on the other hand all of their games do have some large jackpots when you compare them with the competition. You can try out all of these games for free before you start betting, but keep in mind that you will only be able to win the jackpot prizes wen you start betting real cash.

Aristocrat has some really impressive jackpots in their game selection. Unlike other gaming companies, Aristocrat does not currently offer any progressive jackpots in their pokies offerings. However, they make up for it with big fixed jackpots worth thousands of dollars. You can spin one time and win up to a few thousand dollars just by playing Aristocrat pokies. The good thing about fixed jackpots is that you do not have to bet the max in order to win. Of course, betting the max coin amount will increase your total win but it is not the same as in progressive jackpots, where you are only eligible for the jackpot win if you play a certain number of coins and a certain coin value per spin.

Aristocrat is a top competitor when it comes to pokies. They are the number two company in the whole world in terms of net worth and popularity for pokies machines. They have been around for over 60 years, making them very well known among seasoned gamblers and very well trusted. Aristocrat is mainly focused on in person pokies that you play at land casinos. They only recently started adding online pokies to their repertoire. Because of this, their library is not quite as large as some other online pokies companies such as NetEnt and Microgaming. However, you will find that the games they do offer are of an extremely high quality and they have some great jackpots, although one drawback is that they do not offer progressive jackpots.

Most games that you can play on your desktop, you will be able to play on your iPhone too. Simply download the app. The app games will be especially designed for your phone, giving you a much better experience than playing through your browser.

Pokies have come a long way since the clunky mechanical machines of the 1920s. Now there are so many different pokie games to choose from, you could never get bored. Play a variety of pokies, have fun, and discover what you like and what you don't.

One of the world's biggest software-providers for online casinos, Playtech offers a wide range of services. It produces all kinds of quality games and also powered the first land-based casino in Europe that went online.