Microgaming Pokies: See what makes these pokies so special

Microgaming has been one of the most recognisable developers of gambling games for 20 years and Microgaming online pokies casino sites continue to pull in players.Microgaming pokies total about 750 right now, of which around half are pokies online. Microgaming is simply unrivalled when it comes to big-budget, big-name games.

In 2021, you can enjoy Microgaming online pokies at dozens of great casinos. The only problem you will have is what game to choose. Spin Palace is a good place to start looking, and is known for its truly high quality gaming options.

Read on to learn more about: 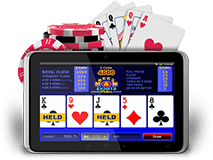 EACH recommended casino is rigorously tested so you can count on:

Microgaming has been a pioneer in online gaming since its inception. The company developed the first software for a casino online 1994, and with it the first Internet pokie games. They went on to provide table games like roulette and blackjack to online clients, as well as continue to create ground-breaking new pokie titles.

As well as classic titles like Cash Splash, the firm started to develop partnerships with game manufacturers, first partnering with Eidos to produce the Hitman and Tomb Raider pokies, based on the popular video games, and big-name tie-ins with the Osbournes.

In 2009 the company celebrated its 400th download gambling game, but it was in 2010, with the release of big flagship titles like Thunderstruck II, Hellboy and Lord of the Rings (amid a huge protest from the Tolkein family) that the company really cemented its place at the top of the Internet pokies tree.

Microgaming carries on trailblazing in the world of Internet pokies for Australian players. With big movie tie-ins like The Dark Knight, and 2014's big release, Jurassic Park, the company, shows it has the kahunas to tie up the big deals. However, it's with its Norse-themed Microgaming online pokies like Avalon II and Thunderstruck I/II that have proved particularly popular.

In terms of gameplay, you’ll find classic slots with just a few paylines, all the way up to titles that carry the trademark 243-ways-to-win format. Jurassic Park is just one of the Microgaming online pokies that uses this betting format, which allows players in Australia to stake much more across the reels than ever before. The game also features a ripper “T-Rex Alert Mode” which dumps 35 Wilds across the game screen during the bonus round.

Ever the pioneer, Microgaming recently released Multi-Player Wheel of Wealth: Special Edition, a pokie that features the world's first multi-player format. On entering the game, players are allocated a 'room' where you get to play against other players as you all gun for the big cash jackpots.

But that's where it begins for Microgaming. The developer's progressives are the envy of rival developers, with titles like Mega Moolah awarding some of the biggest jackpots ever seen. Released in 2006, Mega Moolah was responsible three years later for awarding the then-biggest progressive winner at €6.37 million ($AU9.3 million).

Meanwhile, in 2012, a UK player took down a progressive jackpot on The Dark Knight worth £5.8 million ($AU10.8 million). It remains one of the biggest progressives won at the Microgaming online pokies.

If you gamble online in Australia and you're lucky enough to find a good Microgaming pokies casino online, you are in for a treat.

We hunt out the best Microgaming casino sites on the net. With our leading reviews you can find a top pokies site with hundreds of Microgaming online pokies casino titles, and you will even benefit from a top welcome bonus when you sign up.

Microgaming is a huge online casino company that is based out of the Isle of Man. They claim to be the company that released the very first ever online casino way back in 1994, and they have been leaders in the industry ever since. So many online casinos use Microgaming software, including Carmen Media Group casinos, Fortune Lounge Group casinos, and more. Usually Microgaming casinos include over six hundred games, including pokies. They also power a number of progressive jackpots through interlinked casino networks. They develop some of their own games and contract some others to Derivco, based in South Africa.

Microgaming produces a lot of the well known pokies online, which tend to have really great bonus features and standout jackpots reaching up to millions of dollars. Some of their well known games include Mega Moolah, King Cashalot, Major Millions, Triple Sevens, Treasure Nile, Mega Moolah Major, LotsaLoot, Mega Moolah Minor, Tunzamunni and more. These are just a few of the selections that Microgaming offers. They have over 20 games alone that offer progressive jackpots, which go up in value each and every day until someone wins the big prize. Microgaming currently offers over 225 casino games on mobile devices, including a ton of pokies apps. They also have licensed video pokies such as The Dark Knight.

Microgaming pokies are offered at many of the biggest casinos online. Some of the online casino firms that use Microgaming software are Carmen Media Group, Fortune Lounge, 32Red and the Palace Group. These firms have tons of online casino websites, so you will not have any issues if you want to play one of Microgaming's 225+ games online. You can go about this two ways. You can either search for the casino first and browse their offerings to pick a pokie to play, or you can search for a specific game that matches your preferences. This is a good option if you are looking for particular themes or features. Just search for the pokie in any search engine and you will find tons of casinos where you can play.

Microgaming's pokies are not rigged. They are extremely safe to play. All you need to do in order to confirm this is look at the history and the legacy of the company. They have been around since the very beginning of online casinos, having started the first online casino in 1994. They have always been on top and that is because they have great customer loyalty, people who keep coming back to play their games time and time again. Customers come back because the games are fun and full of great features, but also because they know they can be trusted. Why take a risk on a less well known name in online pokies when you can guarantee safety with Microgaming?

Microgaming has a lot of really excellent jackpots to choose from in their online pokies selection. The biggest jackpot by far is the Mega Moolah progressive jackpot. This is where Micogaming really pulls out all the stops and offers huge wins to everyday players like yourself. The average win for Mega Moolah is 3.8 million dollars! That is huge! You hardly ever see wins that big in online pokies. They also have over 20 different progressive jackpots to shoot for if you want to try out other games as well. The other jackpots range in value from around two thousand dollars to seven hundred thousand dollars. With wins that big, you definitely want to try out Microgaming's large selection of online pokies.

Microgaming has awarded progressive jackpot wins so big, they break world records left and right. In may, 2009, Microgaming awarded a jackpot in their Mega Moolah game valued at over 6.3 million dollars. Yes, you read that right. Some lucky player won over six million dollars with just one spin. At the time that was the world record for the largest online casino payout in history. That is not the only record they have set, though. In April 2021, Microgaming's mobile games at Royal Panda casino set a world mobile jackpot record with a payout of over five and a half million dollars. As you can see, Microgaming does not play cheap when it comes to jackpots. They go big!

Microgaming is one of the very top performers in online casino technology. They have been around since online gambling was invented. Microgaming produced the first online casino in 1994, and they have continued to be an industry leader ever since with innovative new games, great graphics and fast speeds, excellent customer support services and of course, the biggest jackpots in the industry. Microgaming puts out some of the biggest winds you will ever see in online gambling, making people into millionaires in an instant. Not only that, their software always runs very smoothly and is a joy to play on. Definitely give Microgaming software a try, you will not be disappointed.

If you have a Windows Phone, the great news is that you are able to play exciting pokie games whenever and wherever you want. There are so many pokies designed for this device that you are almost spoilt for choice.

When playing pokies, there is terminology to get used to. Examples include: double up - double your winnings by correctly choosing red or black, and progressive jackpot - the jackpot grows by adding a percentage of each bet to the top prize.

If you are looking for a quick hit list of things to do when playing pokies then this should be your first port of call. We offer the ten most important tips to players interested in making the most of their pokies experience.