Play Starburst and 600+ other pokies for free at Spin Palace

Starburst is a space-themed pokie by pokie giants NetEnt that is straightforward to play and you can pick it up and drop it anytime and anywhere you want. While simple, it still maintains a high level of visuals and gameplay. 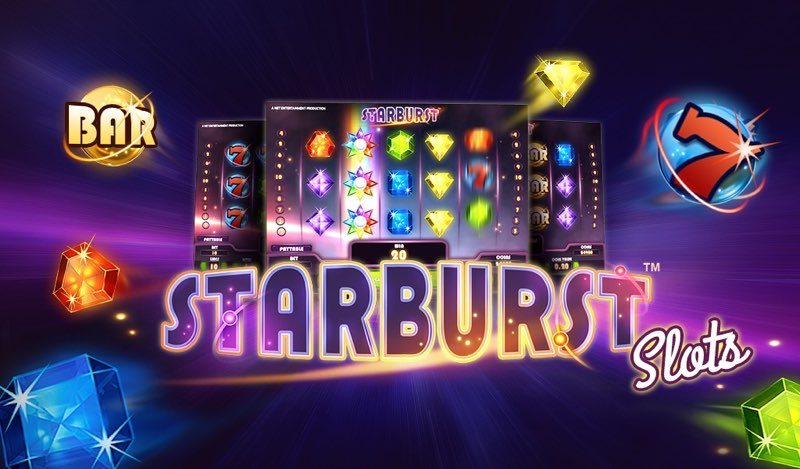 NetEnt is one of the world’s leading online casino software and game developers, so it’s no surprise that they were behind the creation of one of the world’s most popular online pokies. Starburst is a 5-reel, space-themed video pokie that is super simple to understand and play. The game’s single bonus feature (more below) is extremely straightforward and the game’s jackpots can go as high as 50,000 coins.

Its best features could also be considered its worst however, as more seasoned pokie players might find its simplicity a little boring. There are no multi-tiered bonuses, special prize stages, or even a scatter symbol. All that said, while doing our Starburst online pokies review we found that the game can still be very lucrative for real cash players and that there is a reason it has such a strong reputation with new and veteran players alike. Additionally, you can play for free to see if you like the game before wagering any real money.

We learned while doing our review of Starburst that this is a pokie more about quick fun rather than overly-complicated gimmicks. Virtually any and all Aussie-pokie players will enjoy the simplicity of the game once they give it a fair try.

Starburst is a 10-line, 5-reel video pokie featuring glimmering jewel symbols and a colorful 8-pointed star as the bonus symbol. Inside our review of Starburst, you will also find:

This is a game that is highly popular thanks to its fantastic payouts, simple gameplay, smooth graphics, and excellent bonus features that will keep you entertained for days.

On the pokie’s in-game interface you’ll find the options to select your coin value (0.01-1.00), number of lines (1-10), and play level (1-10). This play level option multiplies both your wager as well as any prizes you should win.

While the wild symbol will help you rack up your real money winnings quickly, you will also be content with only basic symbols appearing in multiples as well. The four different colored jewels as well as the 7 and BAR symbols all pay out differently and in increasing amounts for landing them in combinations of 3, 4, or 5. At the low end, the purple jewel pays out 5 coins (pre-multiplier) for showing three times. On the other end of the spectrum, you can earn up to 250 coins for getting the BAR icon to appear five-times on a single spin.

Once you configure your bet just how you like and set the reels in motion, you’ll be rooting in particular for that wild-star symbol to appear on the central three reels. If it appears even once, that entire reel is turned into Wilds for one-to-three free bonus spins that can lead to huge real money winnings. Should another wild appear during your bonus spin, that’s more free spins, more winnings, and so on, leading up to a possible 50,000 coin jackpot that can then be converted into real cash.

This is pretty much it as far as Starburst’s bonuses go, but in a way it’s nice to only be rooting for one outcome in particular as opposed to having a multitude of complicated multipliers and combinations that you can’t keep track of.

With the popularity of playing pokies on mobile apps, it was important to our Starburst review team that the game delivered a great app experience as well.

The simplicity of Starburst transfers over great to mobile devices including most Android, Apple, and Blackberry smartphones and tablets. NetEnt has given Starburst a special place in its ‘Touch’ line of mobile game apps, keeping it both simple to play while still being visually stunning. Play is supported both in your device’s browser or by downloading the dedicated mobile app.

After doing our in-depth Starburst online pokies review, we think mobile players will most enjoy:

Why Starburst Is Worth Playing

As with most NetEnt titles, our Starburst review revealed that it is a pokie that grabs you first with striking visuals and sound effects that coincide perfectly with the game’s retro space theme. You’ll stay around, however, for the expanding wild bonus feature and also for the possibility of hitting that immense 50,000 coin jackpot and other great real cash multipliers.