Big Ben is not currently available to play for free

Big Ben features images from all over London, including the famous clock tower itself, and caters for players with any sort of budget. While not very exciting or impressive, it is a standard pokie with good payouts and a fair amount of extra features. 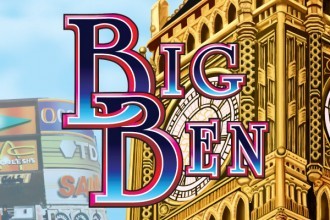 A simple unwritten law of the universe says that if something is considered to have “iconic” imagery, a pokie can and will be made inspired by it. Such is the case for London and the Aristocrat’s Big Ben slot. Not only does it feature all of the most familiar images of The City, but it features many ways to win large lots of pounds (or Aussie dollars if you prefer), too.

Aristocrat is one of the best and most prolific pokie makers both in Australia and worldwide, making pokies since 1953 and being a publicly listed company in Australia since 1996. This pokie is just another in its storied collection, and in our opinion, one of their best. Read below in our Big Ben review to find out just exactly why.

Our review of Big Ben resulted in great scores overall in most categories, and we’d recommend this Aristocrat pokie to anyone that’s not a graphics and sound snob in a heartbeat.

As far as older slots go, Big Ben offers quite a few ways to win and other little features. Our favourite during our Big Ben online pokies review were:

The simplicity of the game's visuals hides lucrative wilds, eye-catching bonus features, and constant prize money multipliers, which can be applied to even the smallest bets.

Big Ben has nine different base symbols you’ll be rooting for to match up on the reels. That’s not even counting the wild and scatter symbols (more on those later in our review of Big Ben). These more common symbols are the standard “poker” symbols of 9, 10, J, Q, and K, then also classic symbols of Britain: a tavern sign, old street lamp, red phone booth, double decker bus, the Union Jack, and the Queen’s crown. All of these pay out for three or more of a kind, except for the crown, flag, and 9 which pay out at 2-of-a-kind and higher. The Wild is the British royal guard, which pays out double on any wins it is a part of in addition to an incredible 30,000 if it shows five of a kind.

Aristocrat made this game suitable for players of all budgets, as it has a very wide array of betting options. Penny players can spin the reels for as low as .02 a spin (.02 on one payline) and high rollers can drop mad pounds at 100 a bet, and then everything in between as well.

Big Ben has two main bonus features. The first shares its name with the game, and is triggered whenever the scatter symbol (Big Ben) appears anywhere on the reels. Just appearing two, three, four, or five times will win you 2x, 5x, 25x, or 1000x your wager, but if Ben appears on reels 1 and 5 at the same time you’ll also get to listen the clock ring between 1 and 12 times. The more it rings the more you win in bonus real money, up to 500x your bet if it clangs 12 times.

There is also a free spin feature that is activated when Ben appears three or more times on the reels. Depending on how many times that is, you’ll win 15, 20, or 25 free games during which all wins are doubled. So if you’re keeping all of that straight, that’s three different ways (normal scatter multiplier, Big Ben random rings multiplier, and the free game feature) to win real cash just from the scatter symbols!

Unfortunately there is not a mobile app version of Big Ben available, nor is it available in Aristocrat’s All-Stars app. Our Big Ben online pokies review team had trouble loading it on our mobile smartphones and tablets, but that doesn’t mean there are some devices out there it could possibly work on. If you look hard enough, you might be able to find it on your favourite Australian online casino apps, too.

Why Big Ben Is Worth Playing

In or outside of an actual land casino, Big Ben is an Aussie pokie classic that can still pay out huge amounts of real cash even after all these years. As long as you aren’t picky about your graphics being the latest and greatest, we’d recommend Big Ben to all Aussie pokie players.