You live in Australia, but if you've ever talked to your pokies-loving friends in the USA, you're well aware of WMS pokies. The firm has been producing top pokies (called 'slots' orver there) for decades. But their appeal has spread across the world. Big WMS pokies can now be played in land-based casinos across Oz, and many of their top titles can be played online in Australia too. For access to excellent online gaming fun check out Spin Palace , our leading recommendation overall.

While you might not find too many WMS online pokies casino sites in 2021, if you’re lucky you'll discover a broad range of games with some interesting betting features that will keep you happily spinning, and hopefully winning, for days to come.

Read on to learn strategies for: 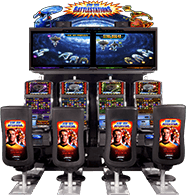 JUST THE BEST WMS POKIES ENDORSED BY OUR EXPERTS

ALL our top-rated casinos are fully vetted so you can expect:

We'd probably need to write a book to fully describe the history of Williams Interactive, but let's try to do it in a page. Formed in the mid-1940s to capitalise on the popularity of new pokie machines in America, the Williams Manufacturing Company started out building pinball machines (Harry Williams invented the “tilt” mechanism on 20th century machines), but it wasn't until the early 1990s that the firm moved into the pokie market.

WMS pokies casino games like Jackpot Party and Reel 'Em In proved hugely popular in land-based casinos, and those two titles made the successful transition to Internet casinos in the late 1990s.

In 2013, amid a period of consolidation and takeovers in the gaming industry, lotteries giant Scientific Games bought out WMS in a deal worth $1.5 billion. The move gave Scientific a lucrative place in the pokie machines industry.

WMS was the industry's third-biggest developer before its acquisition. WMS's buyout should ensure that the firm will continue to release and develop top new WMS pokies for years to come.

Once online, WMS started to bring out big-name tie-ins like Top Gun and Wizard of Oz. But it's with their online transitions of land-based favourites where WMS online pokies come up trumps. Jackpot Block Party, and its close cousin, Super Jackpot Party, feature 100x-line bet jackpots and a cool party vibe. Bonus features are triggered by hitting Scatters on Reels 1, 3 and 5.

Meanwhile, Bruce Lee is part of the “Money Burst” range of WMS online pokies and features a whopping 60 paylines spread across a strange grid consisting of both 2x2 and 3x4 reels. In that title, the first two reels have two symbols only, with Reels 3, 4 and 5 featuring four symbols apiece.

Some of the most-played WMS online pokies feature the crew of the Starship Enterprise as we go boldly where no man has gone before in a range of Star Trek pokies. Based on the classic 1960s series, titles WMS pokies like Star Trek: Explore New Worlds and Star Trek: Red Alert capture the spirit of the original TV show with a nice feature in that you have to earn enough bonus points in order to progress to the next pokie in the series.

If you're into pokies online, WMS titles provide a glimpse of the classic machines that can be played at land-based casinos in America and Australia today. You can play WMS pokies right now by clicking on one of our top recommended links. You don’t need to spend ages choosing a top casino online, because our team of experts have trawled the web looking for the top WMS casino sites with the best WMS titles, so that all you need to do is sign up and play. Australian real-money players like you can find a great range of games and a top welcome bonus when making a first deposit. Fill your boots and attack those great WMS pokies today!

Williams Interactive or WMS, is a casino company that has a steady reputation for producing great gaming equipment and software. They have been around for a long time and have revolutionized the gambling world with some of their innovations. WMS was the company that took pokies to a whole new level by introducing specially designed games that used symbols other than the familiar fruits and card symbols Ace, King, Queen, Jack and 10. They also have created a lot of new ways to decide payouts, which have been really innovative and are often copied by other companies. The first game that Williams Interactive came out with that used different pokies symbols was Reel em In, a fishing based pokie that also featured multi coin and multi line secondary bonuses. This was a game changer for gambling! They have since become a huge player in the online pokies industry, with over 100 online pokies to choose from.

Williams Interactive has so many pokies to choose from, it would be impossible to list them all. They are famous for their licensed games such as Willy Wonka The Price is Right, Star Trek, Spy vs Spy, I Love Lucy, Austin Powers, Cheers and more. These are really fit to suit any tastes. They also have their own games that they developed around themes such as Zanzibar, Zeus 1000, Viking Vanguard, Plataea, Paradise Suite, Magic Wand and Montezuma. These are all incredibly well thought out and they have really nice bonus features as well. The graphics are always spectacular.

WMS slots are found at a lot of online casinos. While some are available to play for free, some slots require that you make a real bet before playing, just like in a land casino. You can easily find a list of all of their great offerings by searching online, and then you can choose which one of the games you want to play or try out. After you have made your choice, you can click on that game and be taken to the free version or the online casino web page. If you want to play for real money simply create an account at the online casino of your choice and start betting cash.

They are absolutely safe. Williams Interactive is one of the oldest players in the casino world and they never rig their games. WMS gaming has been around since 1943 with the advent of tilt pinball, and they have successfully grown the business to magnificent levels over the decades by being honest and innovative with their games. The only time you need to worry about rigged games is when a company is a total scam. The gambling industry is so heavily regulated that it is very hard for a rigged game to stay on the market for very long. Long time players like WMS have to stay legitimate or they will quickly go out of business.

WMS has plenty of good jackpots to choose from. One of the best games to play is the Jackpot Party progressive pokie, which has a progressive jackpot that keeps on growing. Any of their progressive games are going to be a good choice because with every spin, the prize you have a chance at winning gets bigger. This makes game play really exciting and fun! Some of the games with the biggest jackpots are Wizard of Oz, Monopoly Luxury Diamonds, Flinstones, Monopoly Boardwalk 7s, Willy Wonka, clue 2 and Powerball.

The biggest Wide Area Progressive Win to date was 1.8 million dollars. There has also been a win of 1/7 million dollars and 1 million dollars. More common amounts are in the hundreds of thousands of dollars range, such as $493,000, $587,000, $835,000 or $682000. you can goto the WMS home page to see where the biggest winners have been and when they won. The biggest winning games were Wizard of Oz in the number one spot, monopoly Luxury Diamonds coming in second, Flinstones in third place, Monopoly Luxury Diamonds again at number four and Monopoly Boardwalk 7s at number 5. s you can see, the Monopoly games really tend to pay off big!

WMS is one of the leading software providers out there in online pokies. They have been around much longer than almost any other game provider out there. They were around in 1943 when pinball machines were a big deal! Williams Interactive is constantly upping their game even though they are considered older than most other companies. They never lost their edge. This is seen in such innovations as multiple payout options and the advent of different types of symbols and ways to win in pokies machines. They have continued their streak of greatness by entering the online pokies world and dazzling us with some really great games.

Bonuses are generally used to entice new customers, but rules can vary. Some allow you to withdraw your winnings AND the bonus, and others allow you to play with the bonus but it is only the winnings that you can have as cash.

Available to anybody with an Australian bank account, you pay from your account securely. By clicking on the POLi option when paying, you are taken straight to your internet banking service and confirm payment - no need to hand over any of your financial details.

With so many options out there for Australian pokies players, it can be overwhelming at first trying to decide where and what to play first. Our FAQ answers the most commonly-asked questions about online banking, security, online slots, and more.