When it comes to pokies online, IGT leads the way. The US firm has been developing huge land-based pokie machines for decades, but the firm only entered the big time when it went public in the mid-80s. Along with Bally and Aristocrat, IGT pokies dominates the land-based market in Australia, and the developer has adapted many of its classic games for the new online generation.

IGT pokies can be played at our recommended gambling sites, including Spin Palace our top recommendation, so let's take a closer look at International Game Technology and see why their games are so popular.

Read on if you want to find out: 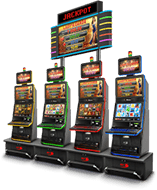 We've vetted EVERY recommended casino so you can expect:

IGT is one of the biggest companies in the pokies industry. The majority of pokie machines in the US are IGT titles, and Aussie bars and casinos boast the latest IGT pokies games. So focused on the Australian market are IGT that the firm even set up a dedicated office in Australia to service the club market Down Under.

It wasn't until 1986 that IGT's technological revolutions sent the company into the stratosphere. The company developed the Player's Edge Video Poker machine as well as one of the first microprocessor-operated pokies, S-Slot.

In the late 1990s, IGT moved to strengthen its position in the UK pokies market by buying out Barcrest Gaming, and further innovations in IGT pokies casino games continued with the ELVIS Wheel of Fortune game.

Many IGT online pokies have origins in the big land-based casinos. Games like Cleopatra and 100 Pandas are now household names across the world and are attracting a whole new generation of fans of IGT pokies online. IGT also has some big-name tie-ins like Cluedo, Monopoly and Dungeons & Dragons and Star Trek.

Siberian Storm has proved a popular winner in land-based casinos in Oz and now online. Based on adventure and animals, the pokie utilises IGT's 720 MultiWay Xtra system with 720 paylines. It also pays both ways (right-to-left as well as left-to-right) and features stacked Wilds and bonus icons.

However, it’s Megabucks that perhaps the best-known among land-based pokies fans. Megabucks was the world's first progressive jackpot pokie which carried a base jackpot of $1 million. Over the years, Megabucks has been responsible for paying out some ripper prizes. In 2003, a lucky software engineer from America bagged a jackpot of $39.7 million (AUD47.4 million) when playing the game at Las Vegas's Excalibur casino.

The Future for IGT

In 2000 IGT unveiled its one-millionth gambling machine and continued to bring out new innovative new games like MultiPLAY Video Pokies. MultiPLAY was the industry's first machine that let players play their favourite games up to four times simultaneously.

Further innovations followed in 2012 when IGT bought out Facebook social gaming site, Double Down, as the company sought to stake its claim to the multi-billion-dollar social gaming market. When it comes to adapting and moving with the times, IGT have showed that they are willing to take big risks.

In 2014, amidst a trend of consolidation and takeovers, Italian gaming software firm GTECH finalized the takeover of IGT in a $4.7 billion deal. GTECH and IGT will combine to form a new holding company, Georgia Worldwide plc, but it remains to be seen what that means for classic IGT titles.

For the best IGT pokies on the net, and to casino online that’s right for you, Australian players can find their favourite games by checking out our list of top IGT casino sites. With our leading expert reviews fans of IGT online pokies casino games in Australia can find themselves a great website today with a range of the best IGT pokies in 2014. Dive in and earn a leading welcome bonus into the bargain.

International Gaming Technology, or IGT, is an international lottery and gambling company that specializes in machines, lotteries and networking products. They sell their products to leading casinos all around the world and also have a great offering of online pokies to choose from. IGT was acquired by GTEH in 2014 for a total of $6.4 billion dollars. International Gaming Technology is based mainly in London, with additional offices in the United States, Italy and Sweden. They also have some smaller offices all around the world in Australia, New Zealand, Canada, China, Russia and more. IGT is truly a worldwide brand in online gambling. They are so successful that nearly half of all slot machines in the United States are made by IGT. One of their most popular is Wheel of Fortune, a massive slot that is found at tons of land casinos and is extremely well known for its progressive jackpot. They have been dedicated since 2010 to building their online presence and increasing the number of games that they offer for online pokies players. You will not be disappointed with IGT pokies.

IGT offers a wide variety of pokies, both in person and online. They have casino games, video lotteries, video gaming, AWP and more. Some of their pokies online include game show themed pokies such as Star Trek, lots of Elvis games, Jeopardy, Wheel of Fortune, Deal or No Deal and Monopoly. They also have pyramid games the 5000 and the 10000 Pyramid. They do not only offer licensed games though, they also have their own line of pokies including Vegas, Baby, Vacation USA, Wold Run, Grand Monarch, Cleopatra and Cleopatra 2, Diamond Queen, DaVinci Diamonds, Fire Opals and many more. They have about 60 titles total to choose from when you are looking for pokies to play online.

IGT makes it incredibly easy for you to find and play their pokies online. They are such a huge name in the industry that tons of online casinos want to carry their games. If you want to try out any of the pokies listed above for free, you can always play as many rounds as you want without betting a cent. The only catch is that you cannot access the huge jackpots or any other cash wins until you start playing for real money. The process is simple. Just search for the pokie you want to try out online, and you will find a ton of links where you can play it for free. When you are ready to start betting cash, create an account with the online casino and you are ready to get started.

International Gaming Technology is a gigantic and very powerful player in the online gambling industry worldwide. They are regulated not only by UK agencies where they are based out of, but internationally recognized authorities and standards. They must adhere to these standards of fairness otherwise they would be heavily fined and persecuted, and likely shut down. Gambling is a huge industry and companies do not get to be as big as IGT if they have rigged their games or if they place an unfair advantage on the house's odds in a pokies game. International Gaming Technology is guaranteed by international regulations to be totally safe and never rigged in their online and off line game offerings.

If you look at a jackpot table for International Gaming Technology, you will see that they have some seriously great jackpots that you can win. The numbers range from hundreds of thousands all the way up to three million and more. They have so many games to choose from, you want to choose the one that has not only the best jackpot but the best features as well. Sometimes jackpots that are extra big are best for high roller players because you have to bet large amounts in order to qualify for a winning spin, especially in progressive games. Take a look at the full picture, the jackpot amount and the other features of a game when you are looking for the next IGT pokie to start playing online.

IGT really blows everyone else out of the water when it comes to massive wins. The largest win to date has been over three million dollars. Right now they have pokies with a progressive jackpot amount of $3,068,839 as well as $11,828,689. Those are not numbers that you see every day! In their Wheel of Fortune pokies game alone, they have awarded almost three billion dollars to date in real cash prizes. International Gaming Technology is a world leader in huge jackpot amounts. You can play any one of their games and know that just around the next spin, a huge jackpot could be waiting!

International Gaming Technology compares very well with other gaming companies around the world. They have been around for decades and have acquired a lot of gaming companies and technology over the years, so they are consistently ahead of the game when it comes to new technological innovations, inventive pokies games and excellent jackpots. Not only that, IGT is known for their high standard of customer service. They have a huge game library of over 60 online pokies to choose from, each one even better than the last with great graphics, original bonus features, and super fun game play. International Gaming Technology definitely does not disappoint when you compare then with other gaming companies.

If you are looking to take a break and pick up some interesting facts then look no further. You can learn the facts and separate them from the fiction. Do pokie machines pay out at different times of the day? Does putting in more money reduce your chances?

When playing pokies, there is terminology to get used to. Examples include: double up - double your winnings by correctly choosing red or black, and progressive jackpot - the jackpot grows by adding a percentage of each bet to the top prize.