Having improved on the original Thunderstruck game, this number 2 has a huge following in pokie circles due to its increased number of free spins, features and the size of the jackpot. The look of it stays crisp and easy to play on any device. 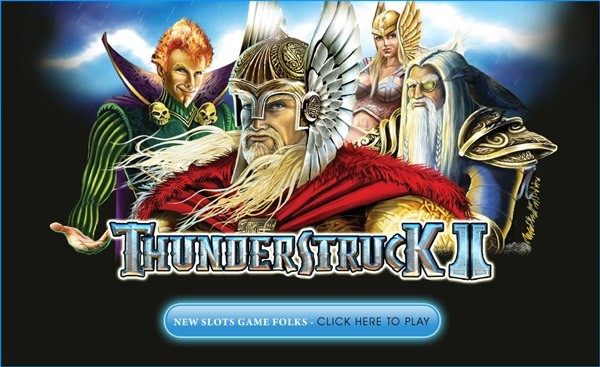 Online gaming software leader Microgaming must have realized they were on to something after they released its original Thunderstruck pokie back in 2004. That successful pokie, while not without its flaws, clued its makers into what people wanted more of (and which essentially became Thunderstruck II).

Those ‘mores’ were more features, more ways to win, and more mega jackpots, all of which the second game in the series has, and then some. Even though it’s a few years old now, T2 was and is an instant slot classic that is still receiving an incredible amount of players (some of which are still winning those incredibly-sized jackpots). Read on in our review of Thunderstruck II to see why this pokie has become somewhat of a phenomenon in the online casino community.

With its video game-esque look and feel, high mobile compatibility (no apps needed), and ridiculous amount of bonus features and high payouts, we couldn’t help give anything but near-perfect scores in every category during our Thunderstruck II online pokies review.

Microgaming has done it again: made a pokie so loaded with features that you are better off just playing the game and seeing for yourself rather than reading through our novel of a Thunderstruck II review. But if you must, the highlights (among many) include:

The game’s symbols all follow the Norse god theme, and you’ll be rooting for Odin, Thor, Loki, the Valkyries, Thor’s hammer, a Viking ship, and palace to all appear in multiples for a small but respectable-payout. There are also 9, 10, J, Q, K, and A poker symbols to fill out the rest of the reel space.

The real money in Thunderstruck II is not won in those base symbols, though. That comes from entering the Great Hall of Spins, which you do by landing three or more hammers on one spin. The first time you enter, you will be granted 15 free spins with a 5x multiplier, however that will only grow as you enter the Hall and more and more. The amount of times you enter is tracked in the paytable, and every five times you do so you will unlock a free spin mini-feature with a different one of the game’s four gods:

It depends somewhat on your online casino (if that’s where you’re playing Thunderstruck II), but the jackpot amount has regularly reached into millions of dollars. The highest fixed game jackpot is 1000 coins (for five-of-a-kind wilds).

Thunderstruck II is so beautiful a game and has so much going on that it can run a little slow on older mobile devices. However, most of the devices our Thunderstruck II online pokies review team tested this pokie on ran exceptionally well. Also of note on mobile was:

Why Thunderstruck II Is Worth Playing

Perhaps the Street Fighter II of online pokies, the sequel to Thunderstruck improved on the already-solid original in every way, cementing itself as one of the greatest and most popular pokies of all time.